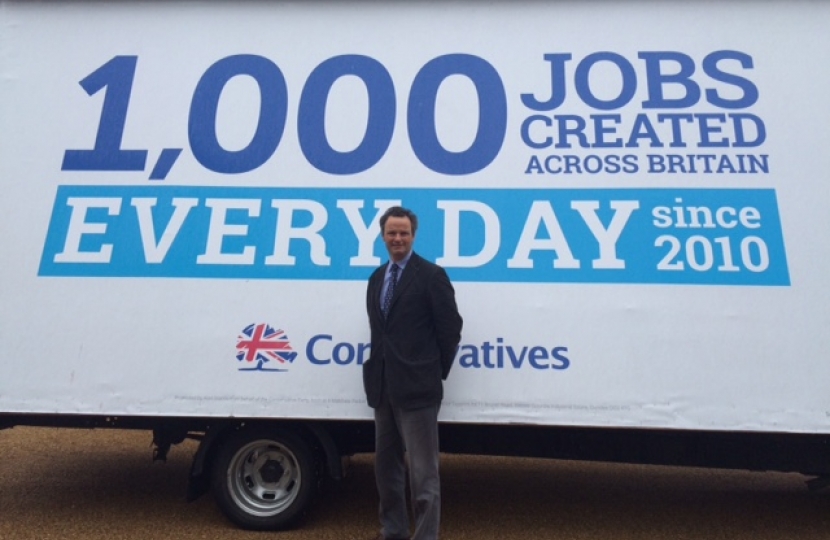 Peter Aldous Conservative Parliamentary Candidate for Waveney has welcomed new figures released today showing that 1,600 businesses in Waveney have benefited from the Government’s Employment Allowance since its introduction a year ago, making it easier for small businesses to hire staff and create new jobs.

Our economic plan is backing businesses to create jobs, which is why it is so important that we stick to that plan so we can provide more people with the economic security that a regular wage brings. All that would be put at risk if Ed Miliband becomes Prime Minister next week, propped up by the SNP – hardworking people would pay the price with higher taxes and fewer jobs.

The Employment Allowance provides up to £2,000 off the National Insurance bill for every employer and is open to businesses, charities and community amateur sports clubs.

The allowance means a business could now hire someone on £22,400 a year, or three people working full-time on the minimum wage, and not have to pay any employer National Insurance Contributions. This is making it easier for local businesses to grow and create more jobs in Waveney.

Since it was launched in April 2014, over 1.1 million employers across the country have benefitted from the Employment Allowance.

“Our long-term economic plan is backing businesses to create jobs so more hardworking people have the security of a regular pay-packet. Since we introduced the Employment Allowance a year ago, 1,600 businesses in Waveney have had their jobs tax cut, making it easier for them to hire staff and create new jobs.

“These new figures show that our plan is working, but all that is at risk in just seven days’ time if we have Ed Miliband as Prime Minister, propped up by the SNP. Their plan for more spending, more borrowing and more taxes will put vital investment here in Waveney at risk, and hardworking people will pay the price.

“That’s why it’s so vital that people vote Conservative next Thursday – so we can carry on supporting our local economy and delivering economic security and peace of mind for people in Waveney.”

“At this election we face a clear choice. People can either vote for political instability and economic chaos, with a weak Ed Miliband propped up by the Scottish Nationalists, which will mean tax rises and job losses; or people can choose David Cameron and the Conservatives, and stick with a plan that is already delivering jobs, growth and a more secure future”.